Out with the Optima, and in with the new. Kia has applied the K5 name to its Optima-sized replacement for the 2021 model year. This is the 2021 Kia K5, and it packs a pretty good punch for the midsize sedan space. Sadly, it’s not Kia’s take on the K5 Chevy Blazer. Even Chevy’s take on the Blazer is… ok, moving on. And sure, it follows the standard “all-new” ode that is longer, wider, and lower, but it does so by taking design elements from Kia’s latest hits and applying them properly. Stuff like lines from the Stinger and amber/orange driving lights from the Telluride, but with each element getting its own unique style.

It’s the bits under the skin that are most impressive though as Kia is clearly letting it be known it wants a larger piece of this segment’s pie. How’s it going to get that? By offering a segment-exclusive 8-speed dual-clutch gearbox and a brand-new 2.5-liter turbocharged engine that makes 290 horsepower. 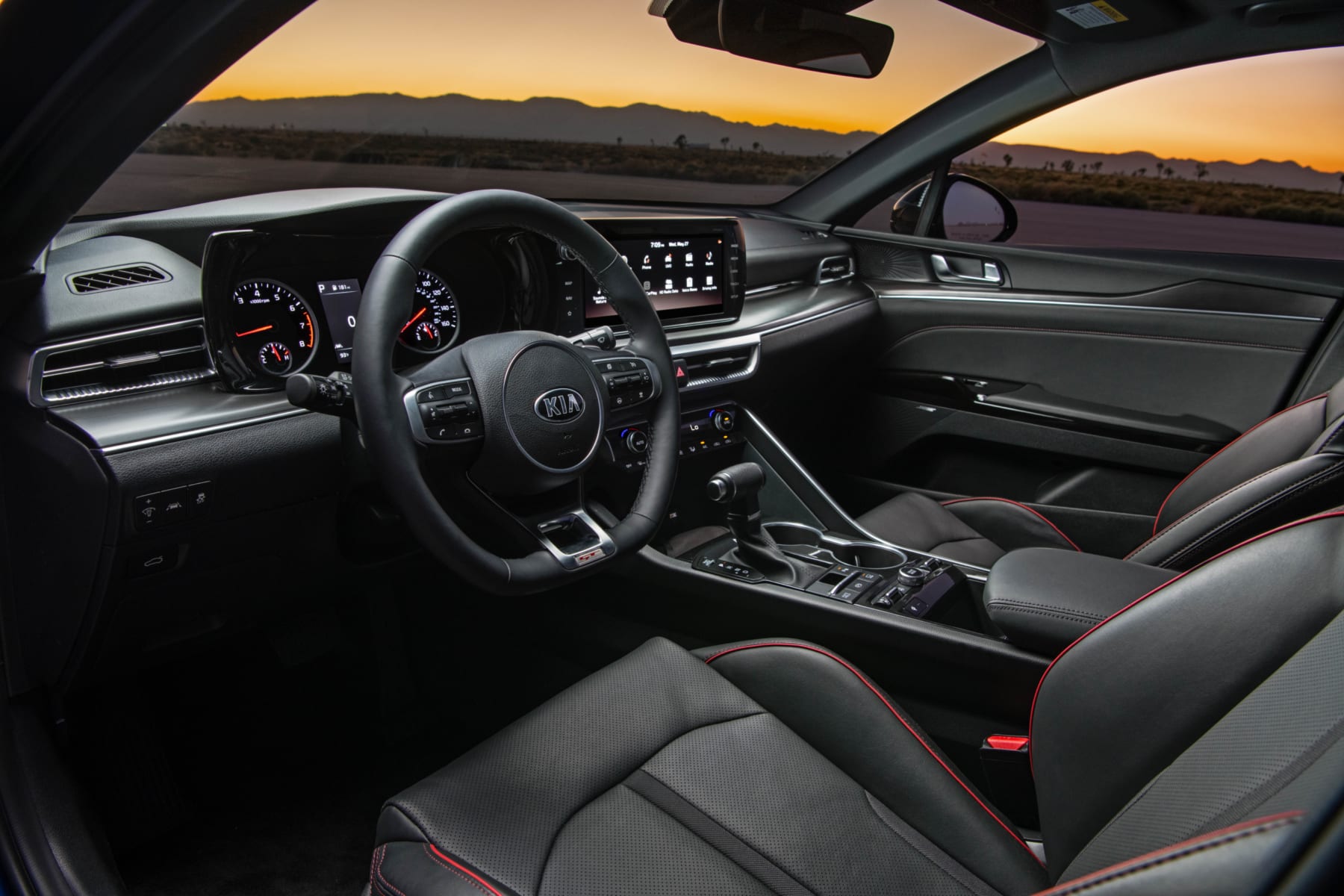 Let’s dive a bit more deeply into that engine. This 2.5-liter unit makes the aforementioned 290 hp but it’s also cranking out 311 lb-ft of torque. Kia says it will run from 0-60 mph in 5.8 seconds. This is when paired with the 8-speed wet dual-clutch on the GT model. The standard engine is a 1.6-liter turbo-four that produces 180 horsepower and 195 lb-ft of torque. This one uses an 8-speed automatic as well, just not one slanging multiple clutches and pre-loading gears.

Kia is going to offer the K5 with optional all-wheel-drive. The system can vector torque front and rear and it’s adjustable based on road conditions, as there’s a Snow mode that alters torque delivery further. It’s a front-wheel-drive based system but it will send power to the rear as needed. Other driving modes include Normal, Smart, Sport, and Custom. These adjust engine response, transmission response, and steering mapping.

Inside, the cabin gets a host of tech. The standard center screen is large at 8 inches, but there’s an optional 10.25-inch display also available. Both are touchscreen units with split-screen functionality. Interestingly, the smaller screen allows for wireless Apple CarPlay and Android Auto but the larger system does not. I’m sure there’s a “fun” story the engineering and PR teams would love to share there…

Regardless, every K5 does have acoustic laminated front glass for better sound reduction and a quieter cabin space. Remember when that was a feature on higher-end luxury cars? This is more proof that cars are universally good at every level.

The upgrades you care about

Kia says its revised the suspension geometry for a more responsive and engaging driving setup. The body is stronger and stiffer, and the center of gravity is lower compared to the outgoing Optima. That’s because the K5 rides on Kia’s new N3 platform. It lets the designers and engineers work together to create a car that looks sporty and actually drives how it looks. So this might just be the baby Kia Stinger some of you were looking for.

The 2021 Kia K5 goes on all this summer. When it does, the first trims offered will be the LX, LXS, INXS*, GT-Line, and EX. The more exciting GT model drops later in the fall.

*There is no trim called INXS, I just wanted to write that.