The contrast couldn’t have been more different.  When the people at DriveShop dropped off this RX450h, they were picking up the Toyota Land Cruiser Heritage Edition.  From old school V8, body-on-frame with a real locking center differential, to a 21st Century unibody soft-roader with a hybrid drivetrain.

I’ll be honest.  For the first two or three days with the RX, I didn’t care about it.  The Land Cruiser had a presence on the road.  It had heft to its steering.  It felt like an event.  Contrast that to the RX450h, which blended into the background.  It had no steering feel or effort with an over boosted electric rack. You were merely going from A to B.

After about the third day I began to understand the appeal the RX has to some people.  Also, why it is still the benchmark by which all other midsized mid-luxury to luxury crossovers are measured against.

First off, the Nori Green Pearly paint is striking.  It is a very nice dark green set off against chrome trim around the grill and the DLO.  Many people are not fans of the spindle grille on the RX, even now five years into this generation.  On the RX, I don’t mind it.

What I did find too busy were all the character lines on the profile view.  Not only are too many, but there is also no harmony to them.  Also, the floating “C” pillar has never worked for me, no matter which OEM has tried it.  In profile from the “A” pillar forward, the RX has potential, it has an aggressive look.  From the “A” pillar back though, someone got carried away with the pencil.  Less would have been more here.

The interior of the RX is very hit and miss.  There were some puzzling items and some shocking items as well.

Something that I noticed right away was the wood trim.  I really should put wood in quotes because I doubt there was any actual wood used in the trim.  On the door trim especially, it felt like plastic trim that had been hydro dipped!  I find that objectionable on a mainstream $30,000 vehicle. It is inexcusable from a luxury brand with an as-tested price of nearly $60,000. 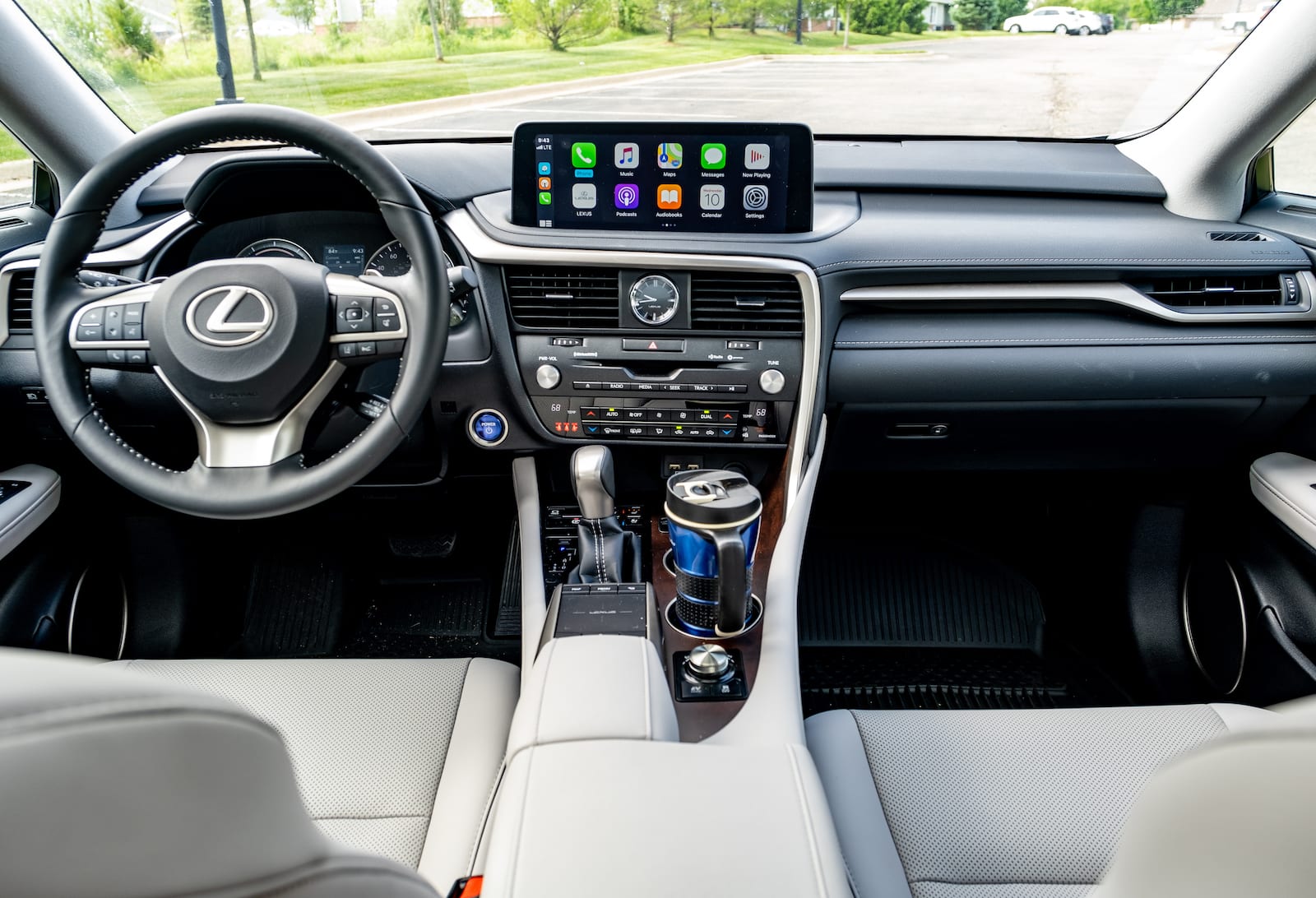 In other places, the materials were right in line for the class.  The lower section of the center console area was nicely padded so your knees had a nice place to rest.  The leather on the heated and cooled front seats was fine (rear seats are heated only).

The cabin is very quiet, even with the large sunroof.  You don’t get a bank vault-like thunk when you close the doors.  However, once closed you do feel like you are in a cocoon.  With this light-colored interior it felt airy, in black though it could feel oppressive.

I believe one of the major selling factors of the RX is that once inside you feel detached from the outside world.  People shopping in this segment are looking to get away from the noise and stress of the world.  The RX does provide that. 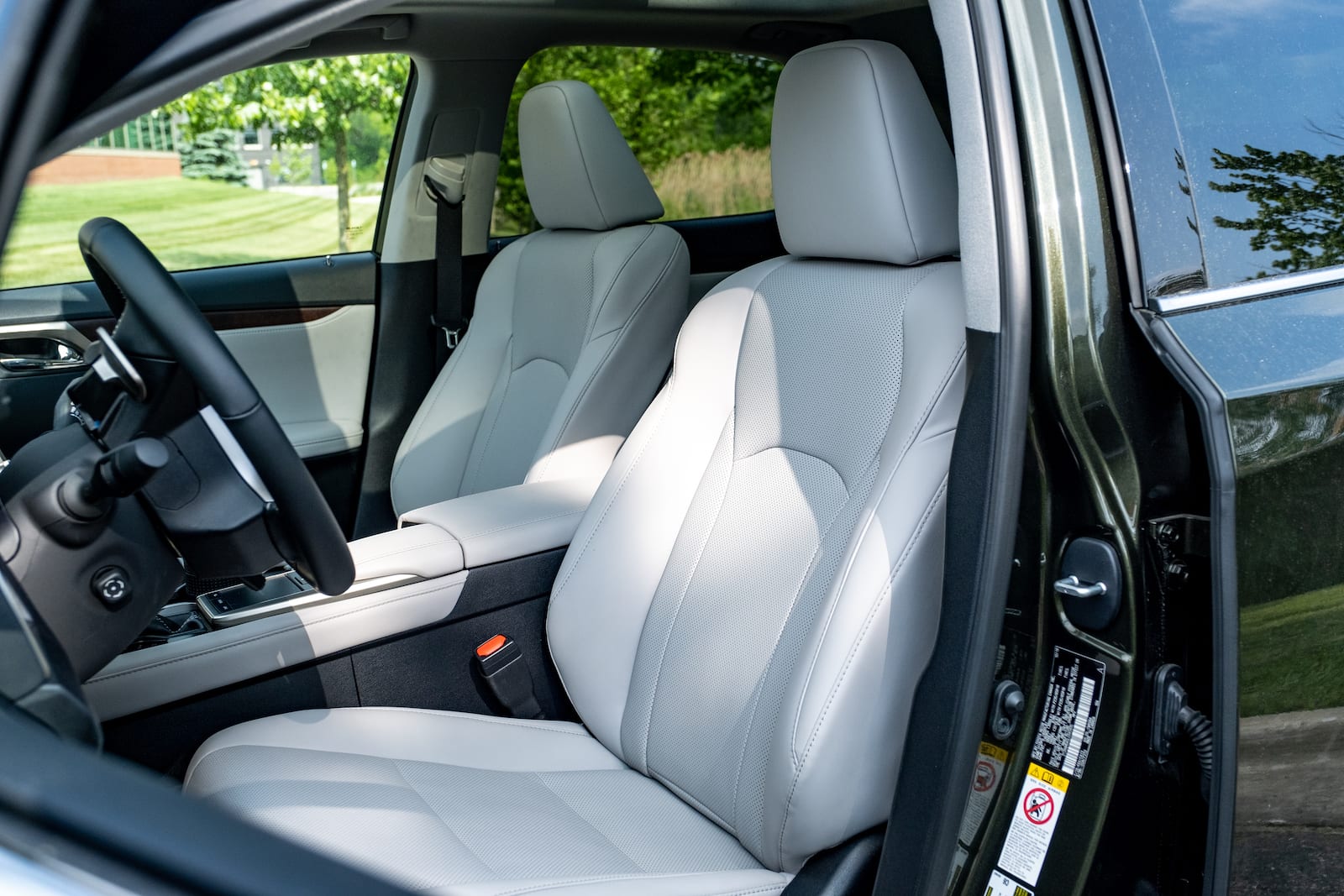 The rear seat room is fairly generous.  I had plenty of legroom sitting behind myself at 5’10”.  Cargo are is fine, though as with most vehicles these days, the rear seats do not fold flat.

I’ve been going on of late that I don’t care about Apple CarPlay or AndroidAuto integration. Also that I’m not a fan of touchscreens for infotainment systems either. The RX will be the exception that proves the rule.  The 12.3-inch display is large and very legible.  That said the Lexus interface is busy and overly complicated.  In this instance, Apple CarPlay made navigation much faster and more intuitive.  As well, while the touchpad is an upgrade from the infamous Lexus mouse, it was still easier and faster to use the touchscreen. 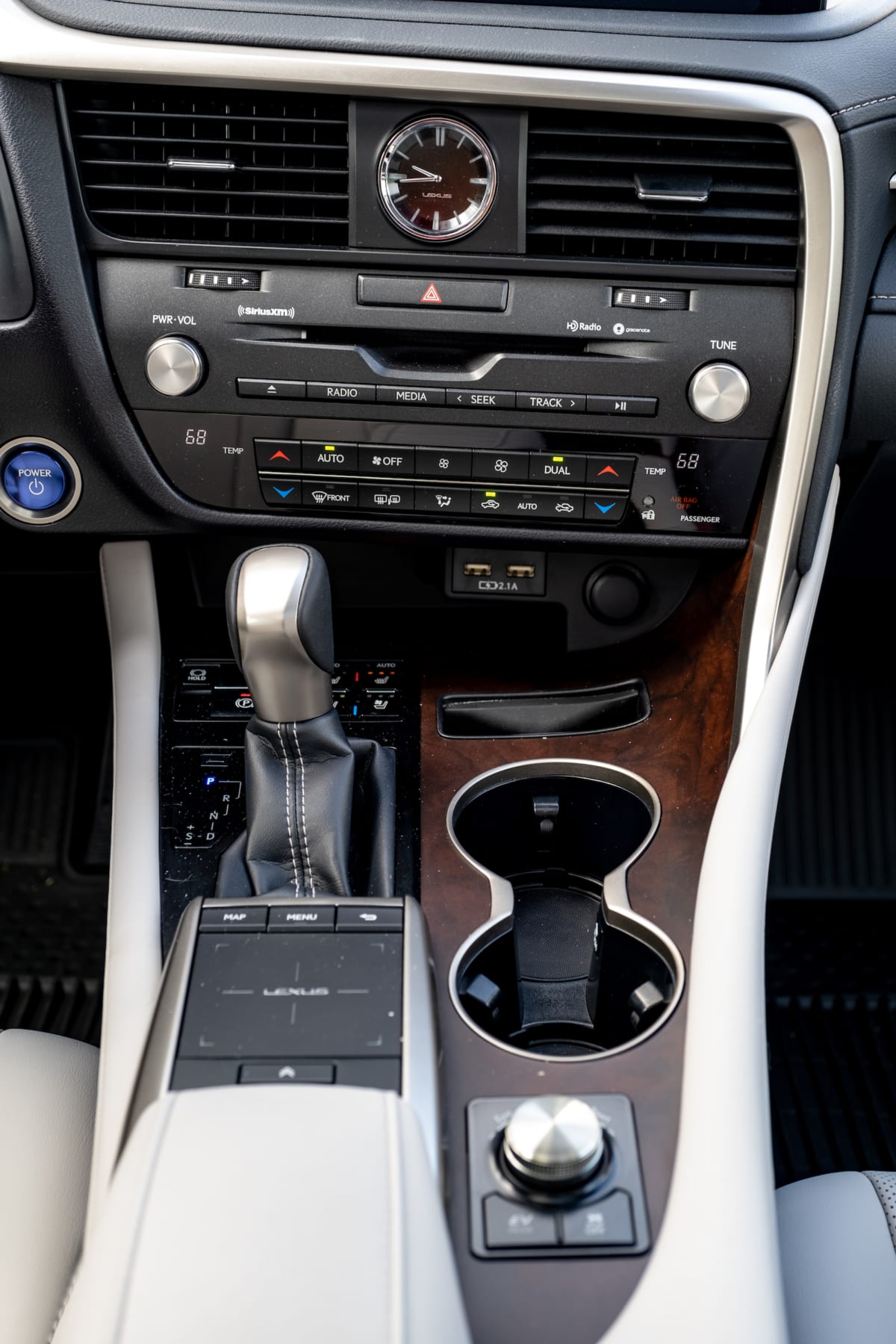 Another oddity was that the USB ports directly under the center stack did not interface with the infotainment system, they were power only.  To be able to use CarPlay you had to use the USB in the center console.  Oddly the RAV4 currently in for review is exactly the opposite.

I alluded to it earlier, driving the RX feels like being disconnected from the world.  If that is your cup of tea, then you will like or even enjoy the RX.  In some ways, I can see the appeal, but all it really does is reinforce the stereotype that this is just an analog to a nice stainless steel appliance.  You are showing off that you can afford something nicer, yet, you don’t want to deviate from the social norm.

Of note, on a warm day, it’s not a good idea to drive in Eco mode.  On an 85 degree day, between the cooled seats and the A/C set to 64ºF, the systems could not get the cabin cool.  My wife, who is very sensitive to heat because of her MS, was getting uncomfortable.  Sure enough, set the drive mode back to Normal, and the fans in seat and the A/C unit kicked up significantly.  It only took a few minutes to get the cabin to a comfortable temperature, whereas before we had been driving for half an hour in Eco mode and the cabin was too warm. 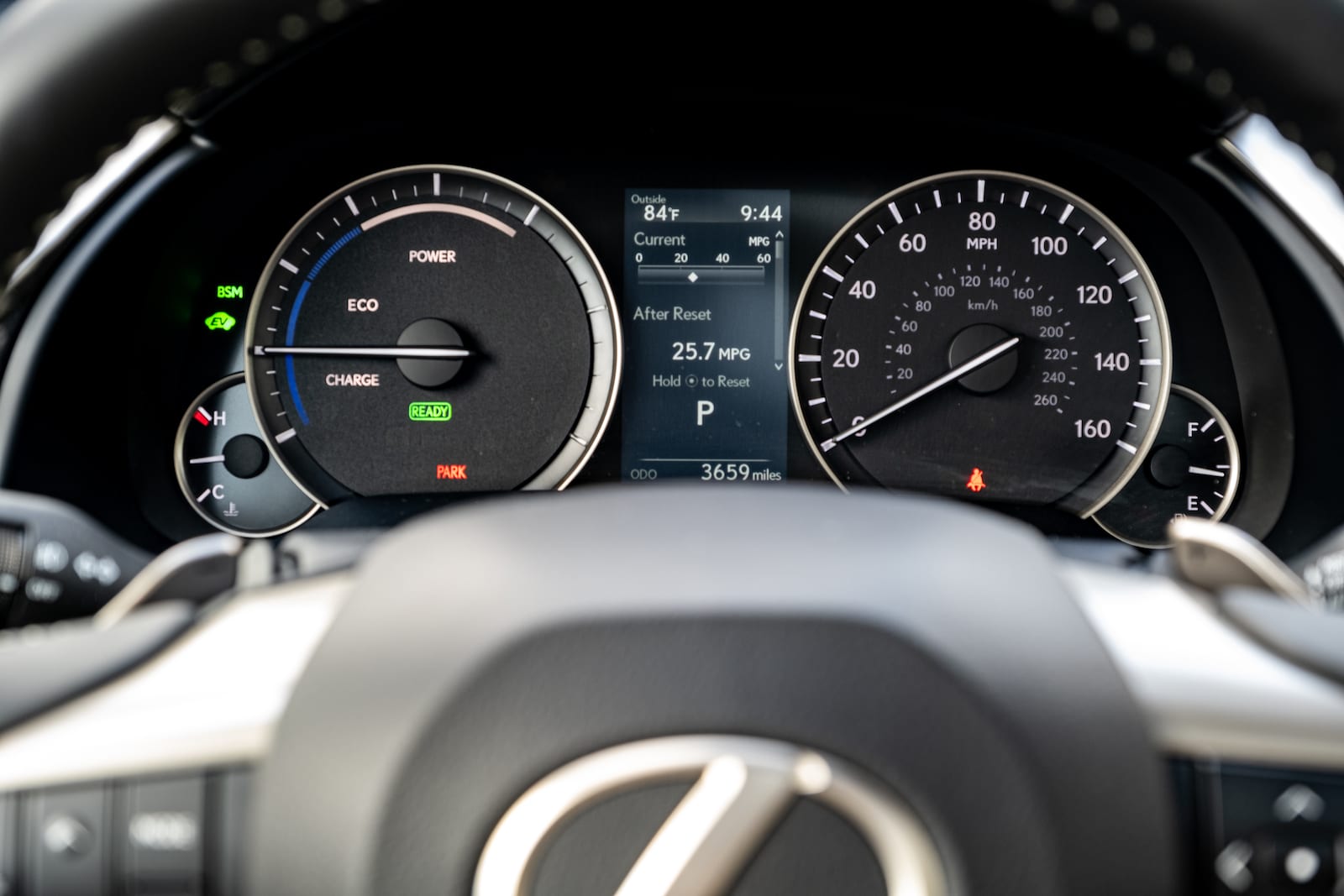 Hybrid fuel economy is always a crapshoot.  OEM’s know how the game is played with EPA mileage and tune the engines and transmissions accordingly.  Sometimes that reflects real-world driving, oftentimes it does not.  Interestingly on the Toyota side of the house, I usually end up very close to book numbers.  On the Lexus side of the house, I never do.  Last year I drove an NX Hybrid and was way off the numbers, here again with the RX I was nowhere close.

The EPA rates the RX450h at 31 city, 28 highway, 30 combined.  Multiple highway runs of fifty-plus miles never saw more than 26 mpg and combined was right around 25.  With those numbers, save yourself the money and just buy the standard RX350.  In the next generation when the hybrid system currently in the Highlander makes its way into the RX the equation might be different.

The RX in general and the RX450h specifically are probably a good choice for a large number of people shopping in this category.   They are looking for something comfortable, and reliable.  Something they don’t have to think about, so they can deal with everything else in their lives.  For me, I far prefer the Audi Q5.  With the 2.0-liter turbo four-cylinder, it gets the same or better fuel economy is just as if not more comfortable, yet feels far more connected all for less money.  I did 550 miles in a nine-hour drive two years ago in a Q5, it still is one of the most effortless road trips I’ve done.  I pulled down 29mpg for that trip.  BMW X5 is good but far more expensive.  I don’t have enough time in the Mercedes GLE to comment, the same goes for the Acura MDX.

If you are in the market, go drive one.  You will know very quickly if this is the right vehicle for you or not.  It has a specific personality, the question is, is it one that you want to spend time with. 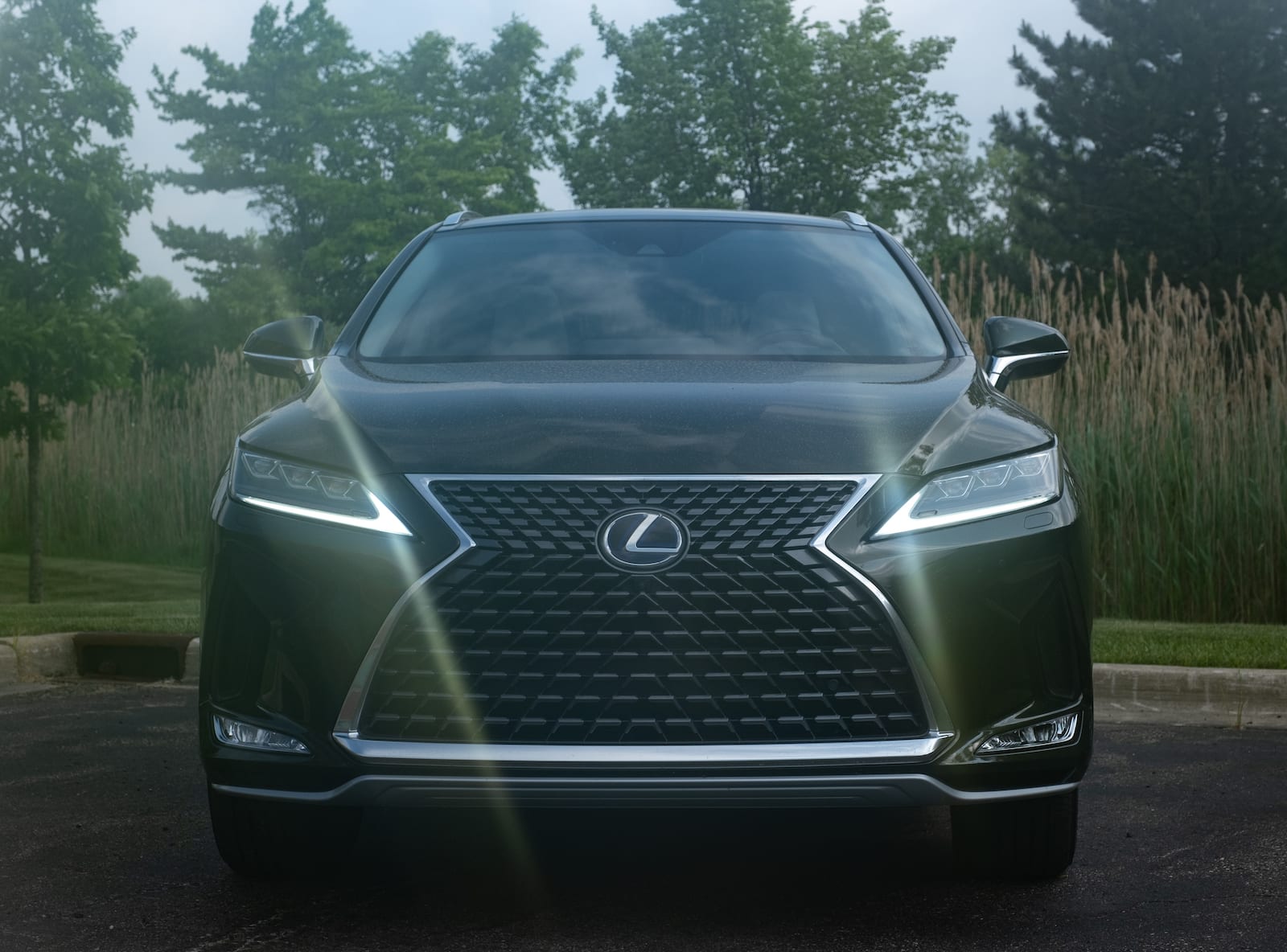