For over a decade now Hyundai’s calling card has been value for money if you aren’t a badge snob. Sure sometimes the interior materials weren’t quite there, or the suspension tuning was a little harsh, but often as not you would get features as standard that you would not expect. Items like heated AND cooled front seats in a $24,000 Sonata, rear heated seats in a $20,000 Elantra.

While some of that value for money equation has eroded as Hyundai prices have crept up, they have improved ride quality, as well as overall build quality. 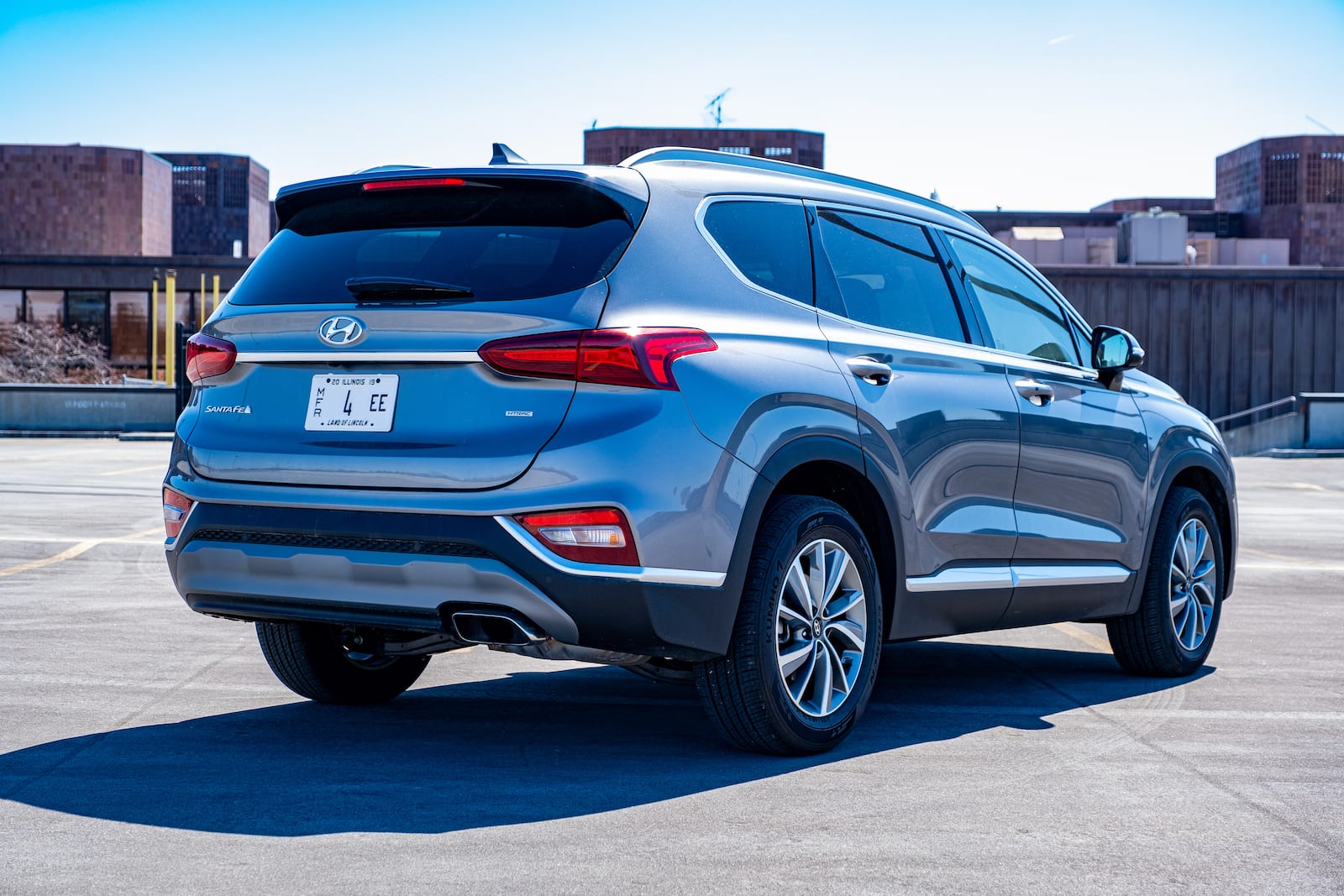 Comes the latest generation of the Santa Fe, this being the fourth generation. My how you have grown. Not just in size but in overall sophistication as well.

Let’s start off with the styling. Where in the past it’s been “fine”, nothing really to call out. Here, it is making a statement. It has a strong, handsome face as well as some tight, crisp, almost tailored lines along the sides and rear.

Inside the materials were nice. The wood trim had a nice look, color, and texture but the thinness of the material gave away its real material makeup. The stitching on the dash was nicely done.  The different textures of the materials on the doors were well done and the cabin had a nice airy feel to it with the large panoramic sunroof. 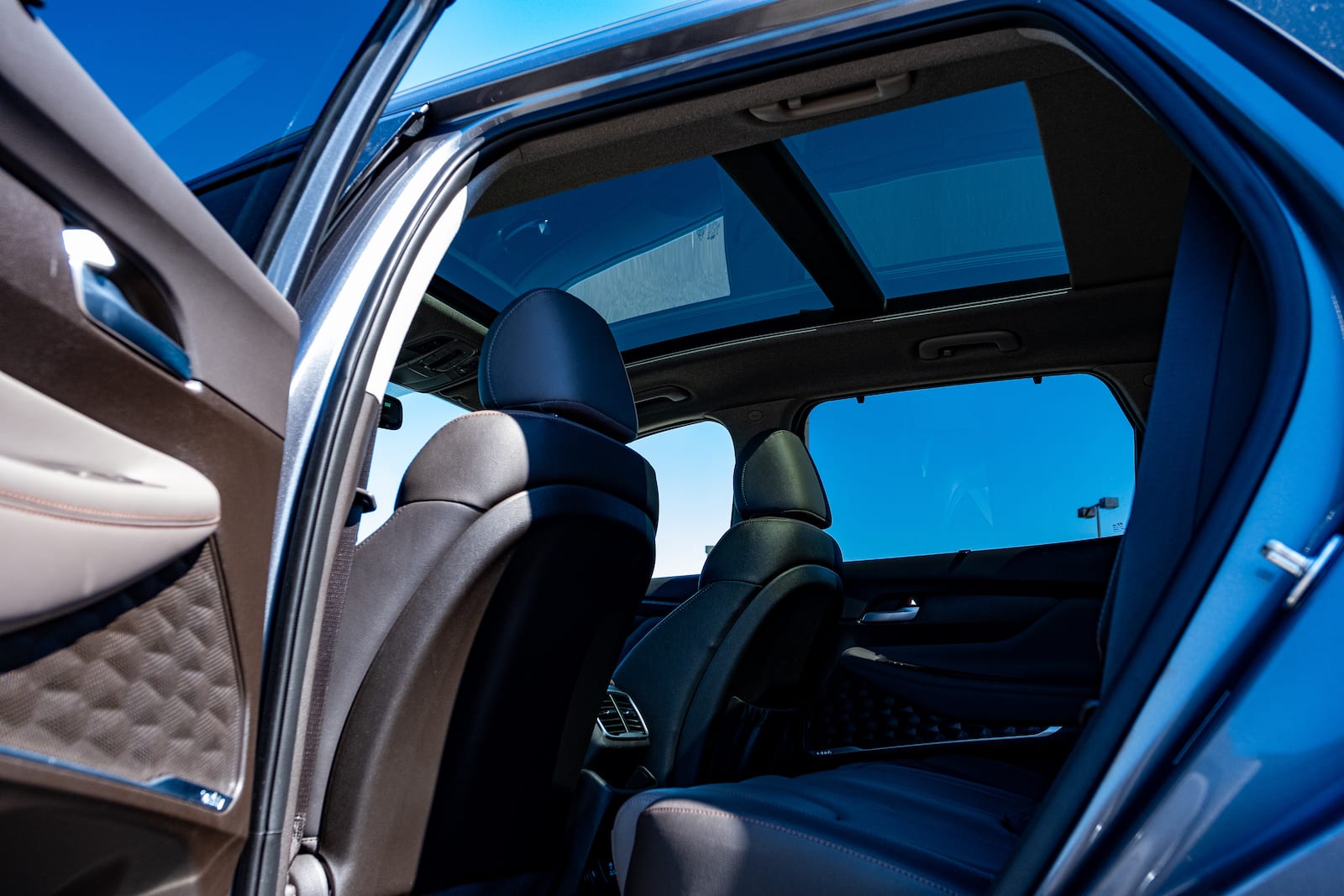 The instrument cluster was a different look than what has been seen in Hyundai’s past. While not retro, somehow it has a callback to the ’60s to it. The infotainment system is good. While the race is on to put the largest possible screen into a vehicle, this one is restrained. However, Hyundai MUST be applauded for including real knobs and buttons, it makes all the difference in the world in quickly and safely navigating the infotainment system while on the move. 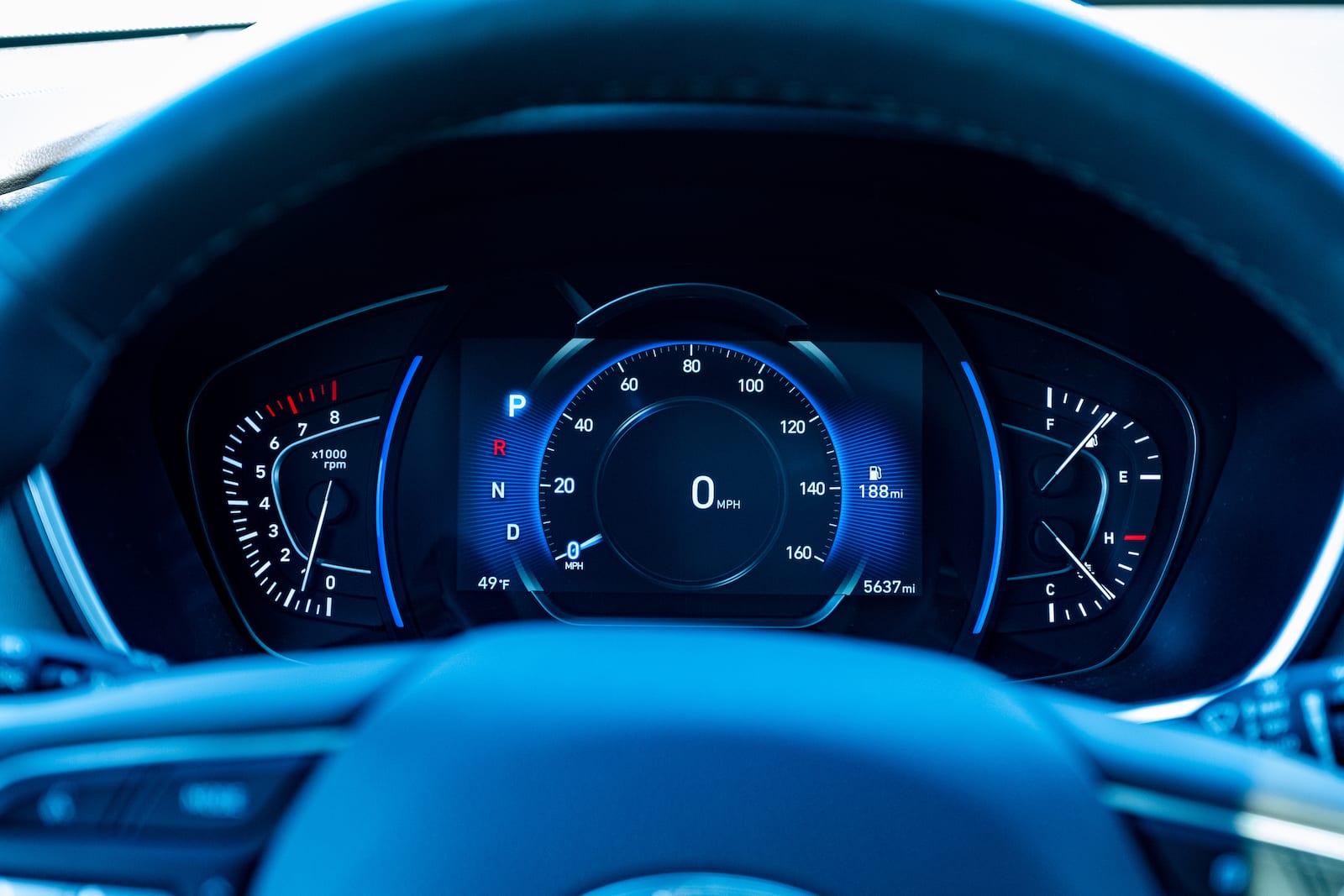 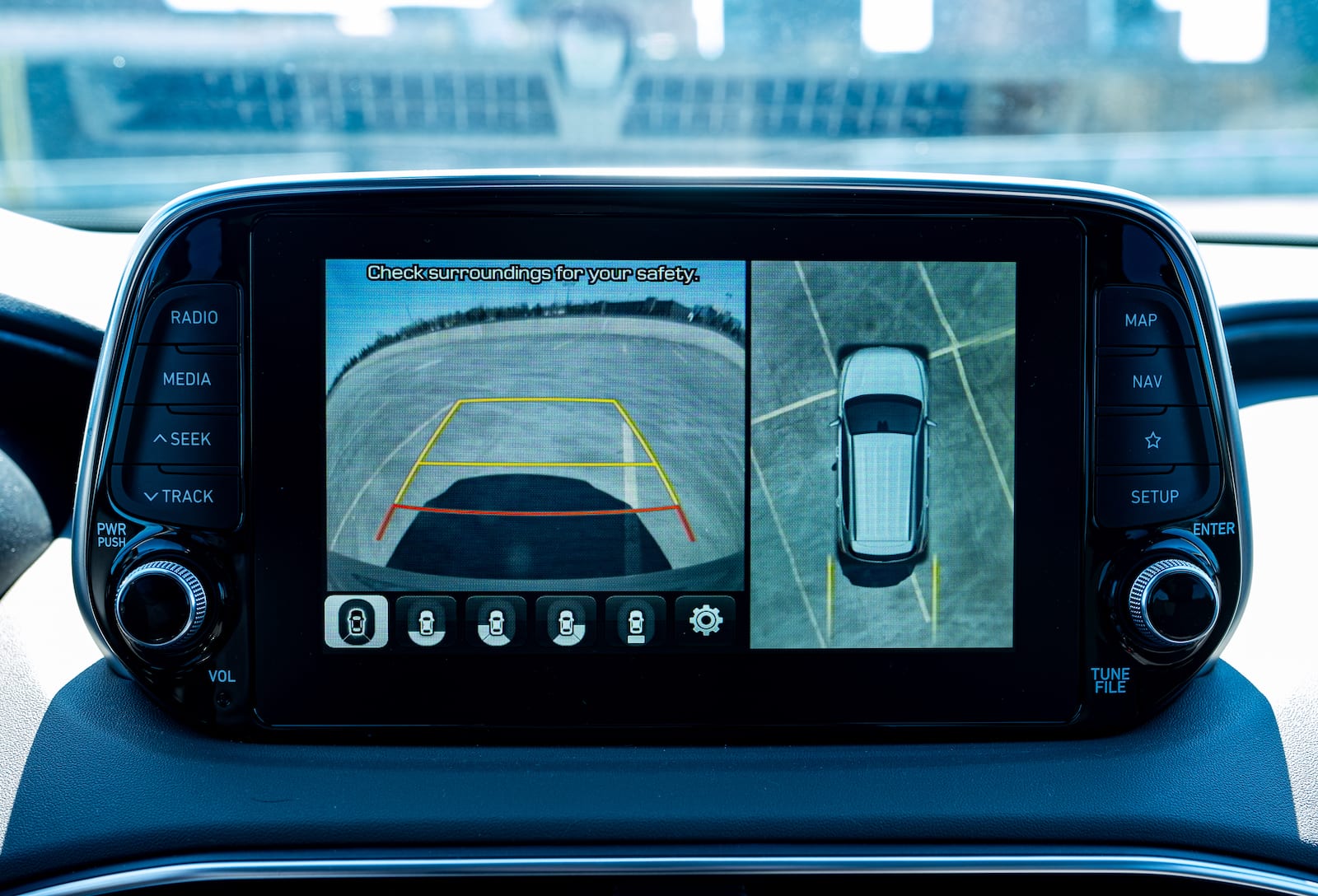 The interior space is quite generous. Part of the design language on the outside disguises the size of the exterior.  It appears smaller than it is so that when you get in, you have that reaction of, “wow this is big in here.” Second-row legroom is generous and when you fold the second row down the cargo area is large. Large enough that my Irish Wolfhound puppy had plenty of room and had no problems standing up.

The powertrain in my test unit was the 2.4-liter naturally aspirated four-cylinder. It produces 185 horsepower at 6,000 rpm and 176 ft/lb of torque at 4,000 rpm, and this was backed by an eight-speed automatic transmission. I would call the power adequate, but I would be looking seriously at the 2.0-liter turbo engine for more low-end grunt. Because the Santa Fe is not a small vehicle, it taxes the non-turbo engine pretty hard when you put your foot into it. 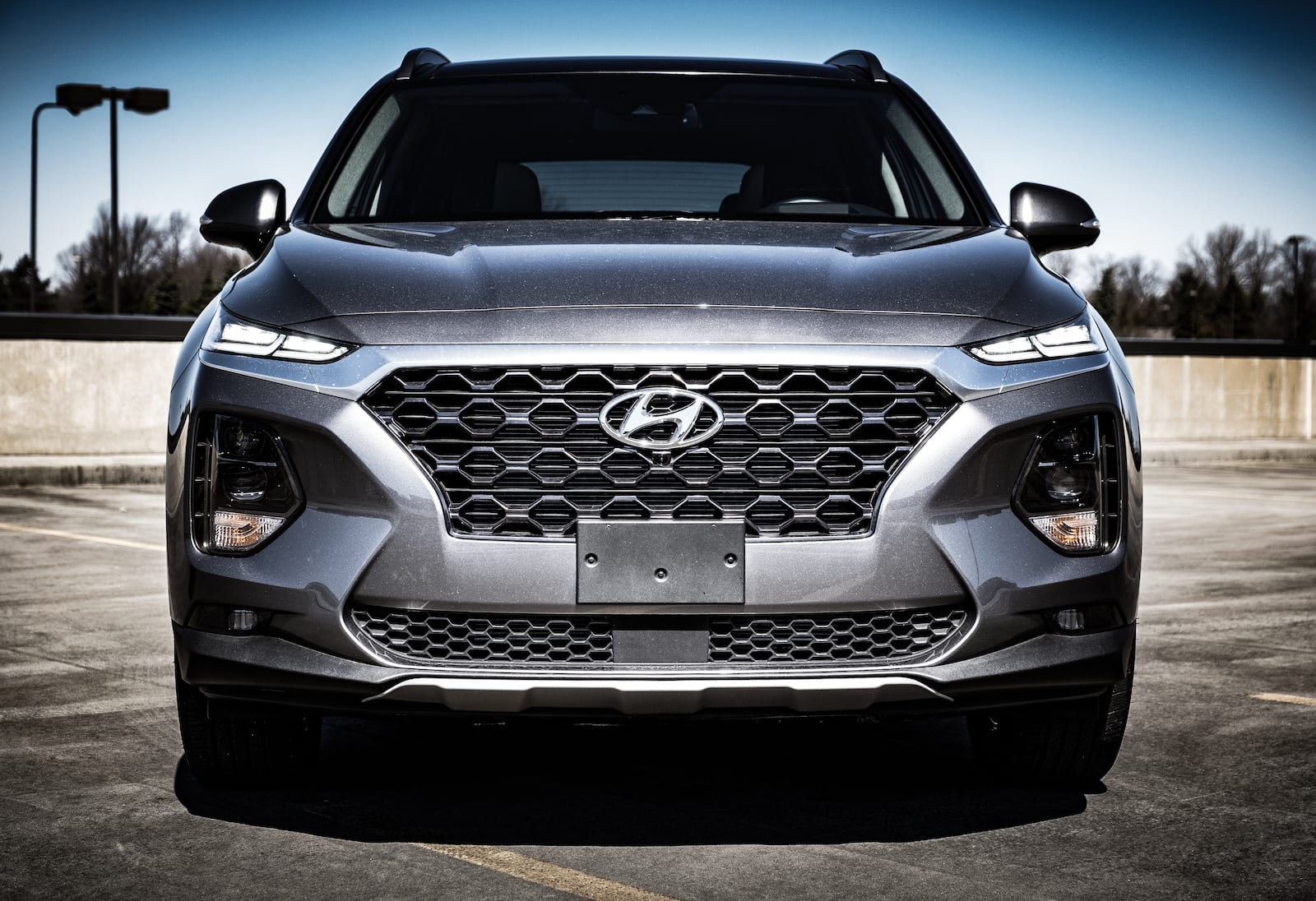 Fuel economy is about average for the category, 21 city, 27 highway and 23 combined. Those numbers were fairly close to what I saw in my week with the vehicle.

The ride was very comfortable and very competent. My overall reaction to the driving experience was, it’s exactly as I’d expect. The steering had some feel, the ride was comfortable and fairly quiet even with all the glass above you. I will say about the sunroof, on a cold day it does radiate quite a bit of that cold temperature into the cabin.  So if the sun is not out, you may want to close the shade, it will make a difference in the comfort of the cabin. 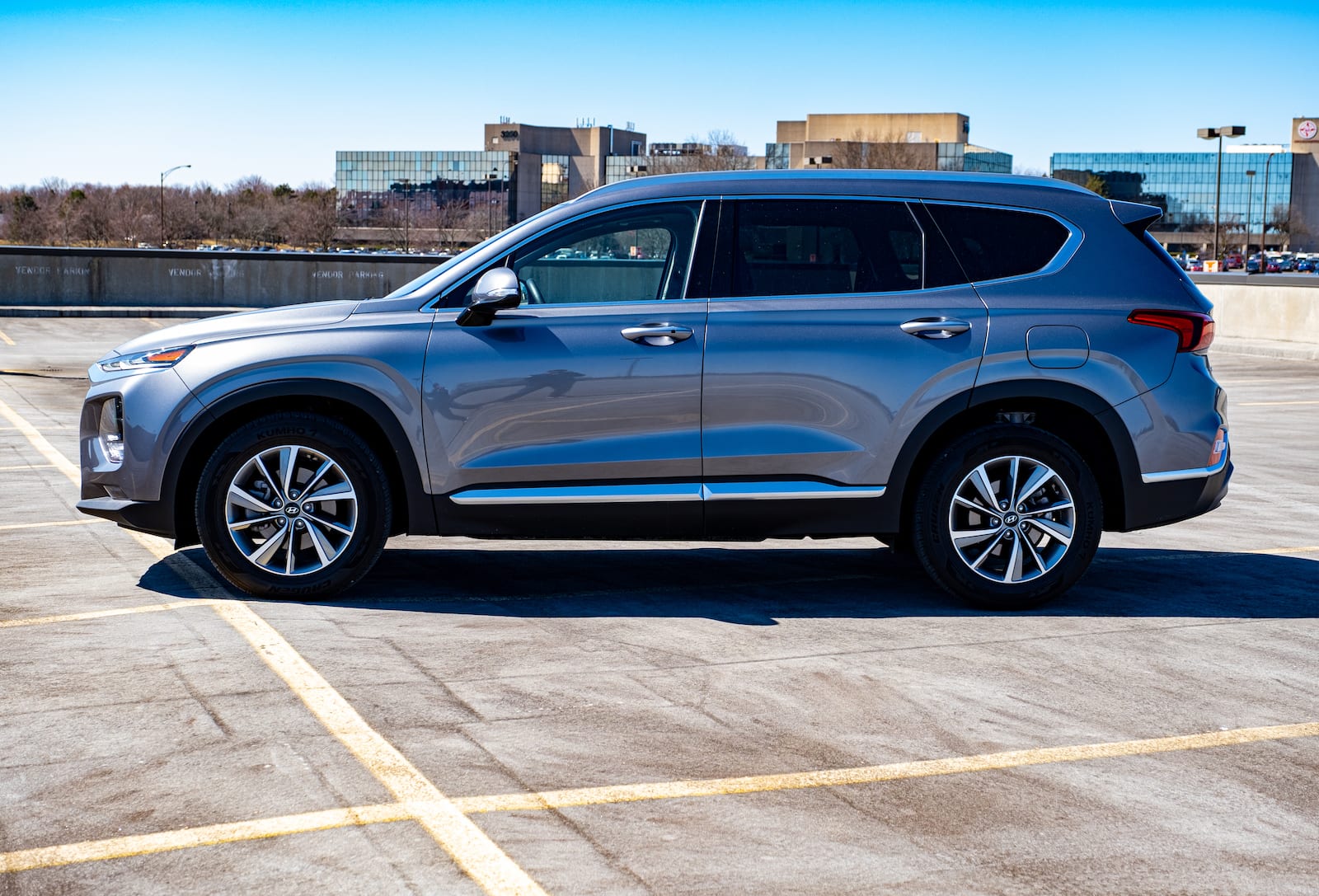 Two vehicles I have recent experience with that Santa Fe will compete with are the Ford Edge (it’s my wife’s daily driver) and the Honda Passport, you can read that first drive review here. The Ford Turbo-V6 has loads more power, but it feels physically larger on the road, not in a good way.  The Hyundai had a better interior and the ride quality was close. 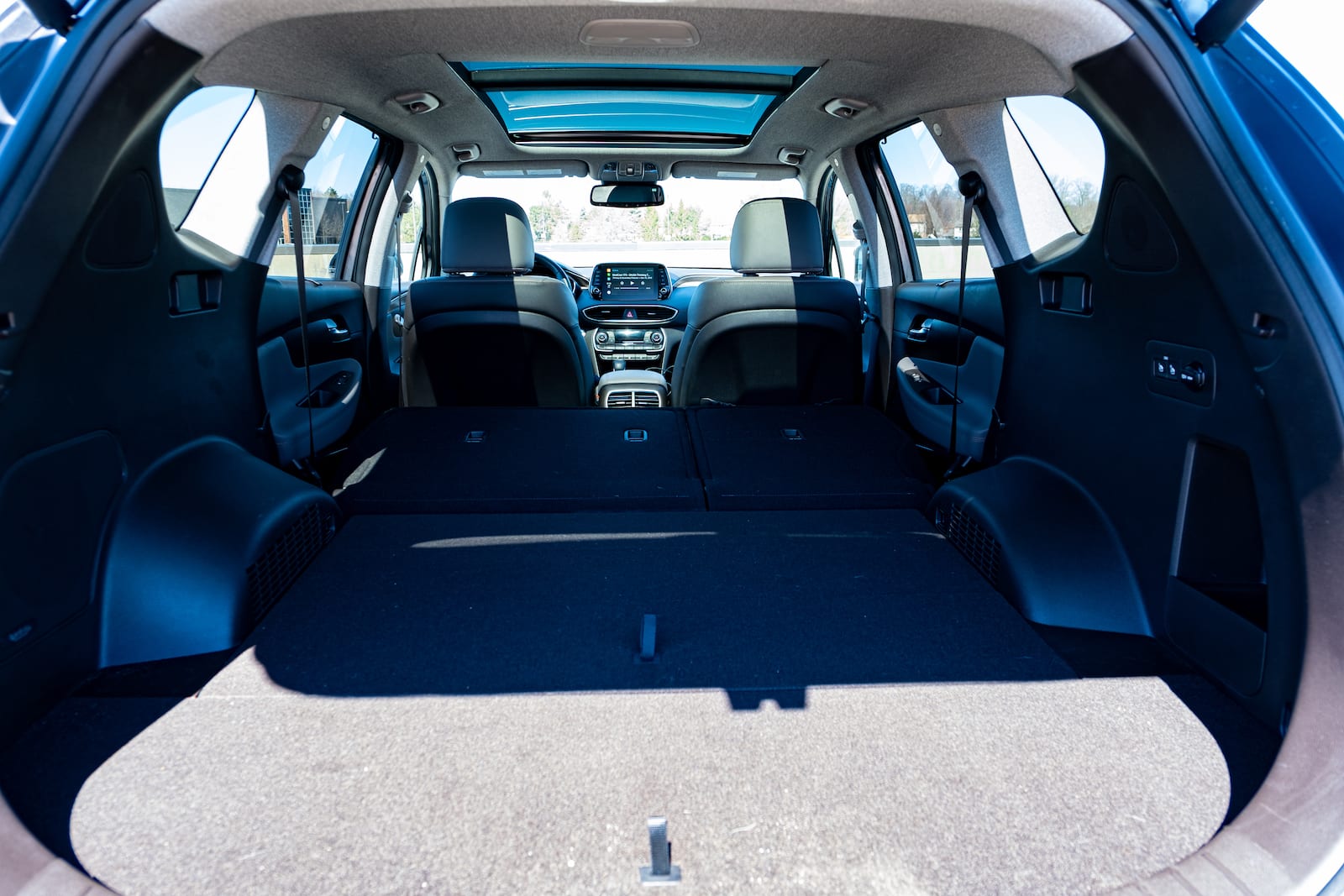 The Passport was a little more engaging to drive, though that impression may have come from just driving around the Moab, UT area and some of the light offroad trails around it. The Honda interior was nice but more spartan, the Hyundai leaned more towards a luxury feel. Again, the V6 of the Honda allowed for more confidence when pulling out into traffic.

Generally, the Hyundai Santa Fe is a strong contender in this two-row, five-passenger mid-sized crossover segment. While I can’t say it’s best in class, it certainly is near the top. What might put it over the top for you is the price. My AWD 2.4 Ultimate version stickered at $38,255 with delivery. In today’s marketplace, that is very good value for money, and as vehicles become more and more expensive it just might be the deciding factor.